Motherboards have features that may be unfamiliar to many new builders. Here are a few basic terms you should familiarize yourself with before investing in a new board.

The term “Z370” refers to the motherboard’s specific chipset. A chipset is the set of silicon pathways on a motherboard that controls the different subsystems within your computer. A chipset is usually particular to a narrow range of processors which can vary depending on the board. For example, the Z370 chipset for one board may support only 8th Generation Intel® Core™ processors. By the same token, the same chipset on another board may support 8th and 9th Generation Intel® Core™, Pentium® Gold, and Celeron® processors.

A CPU Socket refers to the square holder that houses the processor chip or CPU. When selecting a board, it’s imperative to find a processor that matches the board’s socket type or vice-versa. Most Intel processors use a design that features small pins at the bottom of the chip that matches up with holes in the CPU socket. When placing the CPU into the socket, it’s critical that you do so carefully as not to bend one of these pins. Rushing this process could be a costly lesson, as CPU warranties don’t cover this type of damage.

DIMM Slots are slots on the motherboard which house your RAM modules. Most modern motherboards support dual in-line modules. These slots (which can be in numbers of two, four, or eight) easily secure RAM modules using a small plastic push lock which snaps into place once the module is seated in the slot correctly.

The Importance of RAM

RAM or Random Access Memory works as a buffer between the resource requests from programs within your Operating System (OS) and your computer’s CPU. It takes pressure off of your processor by allowing it not to have to deal with every resource request all at once. For example, programs stored on your hard drive request resources from the processor. RAM organizes and facilitates these requests like a filter or the CPU’s personal secretary. From there, the RAM can allow more data to get to the processor at faster rates, which allows the CPU to handle more tasks at once. In other words, RAM modules enable your system to multi-task more efficiently.

Your motherboard’s Frontside Bus (FSB) is the connection between your RAM modules and your processor. Its capacity determines how fast the RAM can convey data between the processor and programs. Some graphics cards (GPUs) also offer built-in memory called vRAM (Video RAM) that improves graphics performance by taking some graphic-based processing burdens off of your systems RAM modules.

Most newer motherboards on the market will offer DDR4 RAM support. DDR stands for Double Data Rate. It is a type of RAM which replaces SDRAM (Synchronous Dynamic Random Access Memory). DDR is also called SDRAM II and has data transfer rates that are twice as fast SDRAM modules. There are two critical factors to consider when buying RAM: capacity and speed.

A RAM module’s capacity is measured in gigabytes (GB). Think of a RAM module’s size as lanes on a highway. The bigger the capacity in gigabytes, the more traffic (data) the RAM can theoretically pass through to the processor. However, if the motherboard’s FSB has a lower capacity than the RAM, it’s like going from a four-lane highway to a two- or three lane highway.

Therefore, it’s vital that the motherboard’s FSB can match the amount of RAM. Fortunately, most motherboards will tell you exactly how much RAM its FSB can handle. Never go over the recommended amount, or you’ll just waste money as the board will only allow the board’s max amount of data to reach the processor anyway.

A RAM module’s pace is measured in Megahertz (MHz), this measurement is an expression of its data transfer rate. The faster the MHz number, the faster your computer should be able to store and retrieve data stored in local memory. For example, DDR4 4400 MHz ram transfers data more rapidly than DDR4 1600 MHz RAM.

If you’ve already maxed your RAM capacity, then the only other upgrade you can make would be to its speed. For example, think of a RAM module’s pace at which data travels on the RAM capacity highway. A faster speed car (RAM module) should get data from the program to the processor and back via the RAM multi-lane highway (capacity) much faster than a slower car (RAM Module).

There’s a simple way to know if your system needs more RAM or faster RAM. If you have a single program slowing down your system, then you may need faster RAM speed. If you have several high-demand programs chewing up your memory, then you probably need more capacity. The safe bet is to improve both speed and size as much you can.

Of course, you may not use it all but would you rather have too much or too little? Also, keep in mind that the nature of programs such as games and even programs like web browsers are only going to demand more resources in the future. Maxing out your system’s capacity and speed may help your computer handle more memory-intensive programs in the future. However, this may not be the most financially feasible option depending on your budget.

How We Chose the Best Z370 Motherboard

To find candidates for our best Z370 motherboard list, we consulted numerous PC builder forums and websites to find out which boards builders most recommend. From there we cross-referenced our list with customer reviews to find only the most highly-rated motherboards.

Here Are the 8 Finalists

After an exhaustive search and review process, our best Z370 motherboard list came down to eight products. Each board offers the DDR4 RAM support and they all have at least one M2 slot with Intel Optane Memory support. Some boards will offer 802.11ac Wi-Fi, and some will not have Wi-Fi.

As for prices, these boards can range between $100 and $600 depending on features such as Wi-Fi and the number of M.2 slots available for example. Moreover, the warranty periods vary between one and three years.

The first model on our best Z370 motherboard list is the MSI Z370 Gaming Plus. This motherboard features:

Newegg customers rated this product 4 out of 5 eggs (stars). One customer said that setup was quick and stress-free. Furthermore, other customers praised the boards easy overclocking features. However, Not every customer was impressed. One customer complained that the RAM slots are too close to the CPU.

This board can cost between $110 and $150. Additionally, it comes with a three-year limited warranty.

The next model on our best Z370 motherboard list is the ASRock Z370 Extreme4. This board features:

Amazon customers rated this board 4.4 out of 5 stars. One customer attests that the overclock speeds were more stable on this board. Conversely, a few other customers reported RAM compatibility issues.

The Extreme4 can cost between $150 and $370. In addition, it comes with a one-year limited warranty.

The third board on our best Z370 motherboard list is the ASUS ROG STRIX Z370-E. This board features:

Amazon customers rate this board 4.0 out of 5 stars. One customer said it runs every game without issues and has excellent overclocking features. On the contrary, another customer mentioned the CPU voltage is highly unstable and the board experiences a lot of Blue Screen of Death (BSOD).

The fourth board on our best Z370 motherboard list is the MSI Z370 GAMING PRO CARBON. This board features:

Newegg customers rated this product 4 out of 5 eggs (stars). One customer praised the RGB lighting, BIOS customization, and onboard audio. Then again, another customer mentioned that the board frequently crashed when using his high-end graphics card. 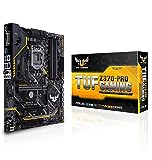 The next model on our best Z370 motherboard list is the Asus TUF Z370-Pro Gaming. This board features:

Amazon customers rate this product 4.2 out of 5 stars. Several customers said the motherboard worked perfectly out of the box with no adjustments needed. However, other customers complained that they experienced several critical onboard driver issues.

The ASUS TUF Z370-Pro Gaming can cost between $120 and $270. Plus, ASUS motherboards include a three-year limited warranty. 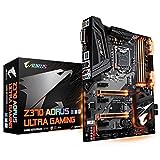 The next product on our best Z370 motherboard list is the Gigabyte Z370 AORUS Ultra Gaming. This board features:

Amazon customers rated this product 4.1 out of 5 stars. One customer complimented the board’s BIOS and “sexy PCB (Printed Circuit Board).” Nevertheless, another customer complained that the thermal armor that covers the rear panel could interfere with installing a large graphics card.

The Gigabyte Z370 AORUS Ultra Gaming can cost between $180 and $450. Furthermore, it comes with a three-year limited warranty.

The seventh board on our best Z370 motherboard list is the ASRock Killer SLI. This board features:

Newegg customers rate this product 4 out of 5 eggs (stars). Customers gave high marks to the board’s BIOS. Furthermore, they said set up was quick and easy. However, a few customers complained that the SATA slots are inaccessible behind the video card.

The ASRock Killer SLI Ultra Gaming can cost between $150 and $270. Also, ASRock motherboards have a one-year limited warranty.

The final board on our best Z370 motherboard list is the ASUS ROG Maximus X Hero. This board features:

Amazon customers rated this board 4.1 out of 5 stars. One customer said setup was pretty straightforward. Furthermore, he overclocked his CPU up to 5 gigahertz with no issues. On the contrary, another customer complained of ongoing onboard sound issues that involve crackling and popping noises.

The ASUS ROG Maximus X Hero can cost between $290 and $350. Additionally, ASUS motherboards have a three-year limited warranty.

Experience the Power of the Best Z370 Motherboard for Your Rig

Finding the best Z370 motherboard for your new build is an important decision. Choosing the right board depends on what features matter the most to you. For example, if you already have a high-end Wi-Fi adapter and router, then a computer with built-in Wi-Fi may not be as important as one with multiple M.2 slots. Or you may want a board that has a 128 GB RAM capacity versus one that’s only 64 GB. Understanding what you want your system to do is the first step in finding the best Z370 motherboard. We hope this information makes your search a little easier. We wish you the best of luck with your new build.

How To Choose The Best Gaming Monitor

Neurology of gaming – What to know about it – Infographic